I have  been ask to look into the status of a level 5 high profile target Micheal Burnham she is on our temporal watch list of temporal manipulation  of the  timeline interfering of the time line. Along with Picard, Janeways and myself,i am told are on the highest priority to keep safe from those who are in the temporal cold war.Daniel has given me insight into how the Nakule and others that influence the federation time line. Not since eugenics wars and the Borg have we experience such a threat. Out side the missions given to me by StarFleet   Intelligence,

Our temporal task force primary assignment is  to protect the timeline and monitor the discovery crew,to make sure NO interference in the activities  of the discoverypecial Micheal Burnham.

Observation #1Subject Micheal Burnham started the war but how? I guess we will find out soon enough…The people above is  pivotal in the war with the Klingons. It seems that Commander Burnham although started the war , it was accident that she killed the Klingon standing  in space he attacked her first. this different than what the official record says about what happened….After the court marshal they sealed the file so no one knows what the official log entrees where . END OF LOG….

Observation#2 It is fascinating that the following are held in such importants they are: 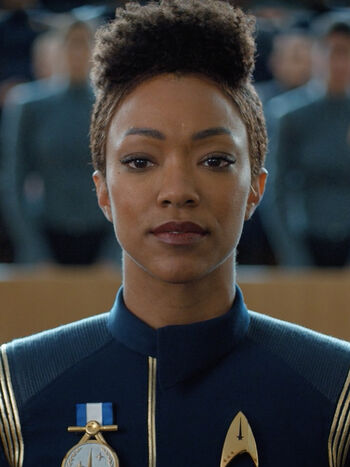 Rank:Commander serving on the USS SHENZHOU s a commander, she served as the first officer aboard the USS Shenzhou in 2256, under Captain Philippa Georgiou, with whom she had served since 2249. (DIS: “The Vulcan Hello“, “Battle at the Binary Stars“) In 2256, she was stripped of rank and sentenced to life imprisonment for mutiny, but she gained a second chance when she was assigned to the USS Discovery. (DIS: “Battle at the Binary Stars“, )

From the Star Trek: Discovery TV series comes this U.S.S. Shenzhou NCC-1227 Vehicle with Collector Magazine #1. The U.S.S. Shenzhou NCC-1227 die-cast vehicle measures about 8-inches long, and is based directly on the original visual effects models created for the show, ensuring an extraordinary level of detail and accuracy. As always the models will be accompanied by a magazine that profiles the ship and explores the inside story of how it was made. Ages 14 and up.

Commanding Officer Lorca’s identity was assumed by his mirror universe counterpart.At some point prior to 2256, Lorca was assigned as the captain of the Buran.Unknown to any one at this time, Lorca had been replaced by his mirror universe counterpart, who assumed the identity of the prime universe’s Lorca. Despite the loss of the Buran, and given mirror Lorca’s manipulative ways, he was givenstarfleet intelligence record command of the USS Discovery. (DIS: “Choose Your Pain“)